Being able to code in a top-in-demand programming language is one of the most important skills in this increasingly digitizing world. With applications across almost every industry, the job pool is extensive, to say the least. The following is a list of the best programming languages that remain to be rather important in 2020 and should be part of any aspiring coder’s skillset.

Coding comes in many different flavors. You can get jobs ranging from designing an interactive website to creating an inventory management system for a bank. Even industries like automobiles, space research, and such, heavily rely on good coders for various tasks. As a result, an experienced and well-learned programmer will often have the pick of the best jobs.

Of course, venturing into programming can feel like a Herculean task. To someone who may not be very tech-savvy, the code of a simple program will seem like gibberish. That really isn’t the case though. In fact, a big part of what makes a programmer successful is their mindset.

If you’re a focused, logical thinker with an understanding of language and mathematics, you’ll find it relatively simple to learn programming. Once you get the hang of your first programming language, it’s just a matter of picking up a few key differences to start growing your arsenal of coding languages. Below are 9 of the most popular ones that are high in demand.

HTML/CSS is used almost exclusively to build websites. Everything from what shows up on your web browser to point links in the right direction requires an understanding of HTML.

Given the constant requirement in the market for not only new websites but also website maintenance and updates, the job pool for HTML/CSS is vast and has something for coders at any skill level.

It is one of the most future-proof skills as the demand for ‘taking businesses online’ will only grow over the next decade. Best way to learn HTML is by practicing. Follow a few web design courses or tutorials and build a few basic websites and you’ll soon find yourself improving dramatically.

PHP is a general purpose scripting language that runs on server-side, i.e. it runs on code that is executed on the web server – giving the user no way of accessing the actual code (unlike HTML).

PHP sees a lot of use in web development. In fact, entire websites can be enclosed in PHP, rendering it virtually impossible for anyone to reuse your code. It can also be used for executing scripts for simple text processing tasks.

PHP on its own has a rather limited job pool. When coupled with other popular programming languages, HTML in particular, opens up a plethora of job opportunities. There are jobs suitable for those with a basic understanding as well as advanced users.

It is considered both future-proof and obsolete, depending on whom you ask. However, the use of PHP might reduce as the years go by, due to modern web development practices that emphasize JavaScript.

Although many people confuse JavaScript with Java, these two languages are, in no way alike. JavaScript started out as a simple scripting language that assisted HTML/CSS in the overall look and functionality of a website. However, over the years it has been adopted as the go-to programming language for web development.

In this day and age, whether you want to learn front-end or back-end web development, JavaScript has to be one of the languages you can tackle well. It has inspired the creation of powerful libraries like React.js, Angular.js, Node.js, etc.

It is not that hard to pick up and is one of the more ‘readable’ programming languages. Understanding the syntax and basic concepts such as variables, arrays, and so on, from online courses should set you on your path to becoming an accomplished full-stack (front-end and back-end) web developer. Pluralsight courses or edX courses might offer a decent choice here.

The backbone of many websites, SQL is not strictly a programming language; it is called a ‘query language.’ In conjunction with PHP and HTML, SQL is a language that allows you to query large databases.

Although the use of ‘No SQL’ databases like MongoDB has negatively impacted its use, many old web applications and websites that do not see any reason to switch – continue to run using SQL.

However, this stiff competition makes the future-proof aspect of SQL, doubtful. Nonetheless, it is a useful and still popular programming language, which teaches you the basics of schema-based databases and their working. As of now, there is still a demand for back-end developers, proficient in SQL.

SQL itself is relatively easy to learn for a beginner, the nuances of databases do confound people new to the concept. Enrolling in an online course is enough for you to become proficient in this language.

It sees extensive use in many different areas ranging from web development to games to even scientific and financial applications. If you’ve used any electronic device, chances are, you have used something made on Java. One of the most well-known mobile operating systems – Android – uses apps made with this language.

There is a lot of competition here; it doesn’t offer an easy place for one to establish themselves as major players without significant experience and knowledge.

Your best bet is to start with a course covering the basics before trying to teach yourself more advanced aspects of this coding language.

Ruby on Rails is a model-view-controller (MVC) framework. It abstracts and simplifies common repetitive tasks, making it easier to build websites and applications.

It primarily sees use in web development and has been growing in popularity recently. Given its efficiency and simplicity, it has been firmly establishing itself as a major tool in the market.

The job market for Ruby on Rails may not be as vast as that of other top programming languages but it is a relatively new technology compared to languages like HTML and Java. Ruby on Rails is on track to establish itself as an industry standard and the job market should continue to reflect that.

It is a fairly straightforward language and as an open-source one, it has oodles of documentation detailing its use. Several online courses should give you a jumpstart on this coding language. However, like all other skills, practice makes perfect, holds true here as well.

Python is a general-purpose high-level programming language. It offers better readability and a more efficient syntax than similar coding languages such as C++ and Java. An extremely versatile language, it can be bent to your will, depending on your skill level.

Knowledge of Python opens the doors to a variety of career paths. Naturally, the more experience you have the better offers will come your way.

Python code is relatively easy to follow, almost like typing out complicated English sentences, making it a fairly straightforward language to pick up. Apart from teaching-to-code focused platforms, you will find a good selection of courses on LinkedIN Learning, edX or Pluralsioght too.

C++ is an extension of the language C and is one of the most used and popular programming languages with a wide variety of applications. It is a high-end language with imperative, object-oriented, and generic programming features.

Although it has primarily seen use in the development of desktop applications, it has also served as the inspiration for several other programming languages that see widespread use in this day and age. Interestingly, advanced games and game engines that millions play, require the use of C++. In fact, Apple’s preferred Objective-C language (used to make apps before the release of SWIFT) was another extension of C (the language).

Though it may not be as widespread as it once was, it still has a healthy job market, though it is skewed towards more experienced programmers. However, it is still a great skill to have, especially as mastering the language guarantees a fat pay package.

C++ is a classic example of ‘easy to learn, hard to master.’ Hence, Java is still preferred as the go-to coding language for beginners wanting experience in object-oriented programming languages, before moving onto C++.

The best bet for an absolute beginner is to start with HTML or Java as they are relatively easy to pick up and will pave the way for easily mastering other programming languages. The more you learn, the more opportunities will come your way and as you build up experience, you’ll find yourself on a lucrative career path.

When it comes to programming the learning never really ends. How much you learn and how much you can achieve ultimately comes down to your own resilience and determination to keep up with this ever-evolving industry.

What are the best programming languages for beginners in your opinion? Furthermore, which coding language beginners should learn first to program Android, iOS apps or work in the field of robotics, artificial intelligence or data science? Please share your opinion and experience in the comment section below.

This site uses Akismet to reduce spam. Learn how your comment data is processed.

VR in Education – Use Cases 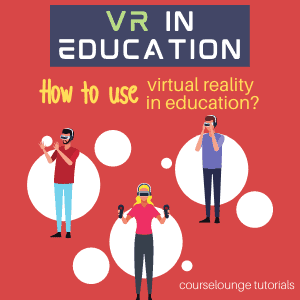 courselounge is a blog and curated course directory to encourage people to teach themselves new skills online.